In 2006, I was a single dad and just starting my career as a professional Muay Thai boxer. My son and I lived in a run-down studio apartment infested with roaches. It was no bigger than a postage stamp. In my amateur years I grew up on Rocky, and I thought living in squalor came with the territory of being a fighter. It wasn’t the best place to raise a kid, but it was ours. And besides, the most important thing on my mind was showing my son that we can control our reality and that our circumstances would one day change.

Right around that time I saw a movie that solidified that idea. It was called The Pursuit of Happyness. It came to me at a time in my life when I knew what I wanted, but I battled fiercely against self-doubt and fear. First, I doubted that I would be able to compete and win in the professional circuit. Second, I feared failing as a single dad. The thoughts of not being able to take the Romulo name places my father hadn’t or not being able to give my son the emotional, psychological, and physical support he needed kept me up at night while he slept soundly by my side.

There was one part of the movie that resonated with me most. “Don’t ever let somebody tell you that you can’t do something,” Chris Gardner (Will Smith) told his son. “Not even me.” He had just got done crushing the boy’s dreams of becoming a basketball legend and realized his words cut deep. As I sat there watching, I teared up because those same self-defeating thoughts crept into my own mind. I could’ve blamed my absentee father or my mother who wanted me to chase the American Dream. But in reality, the self-doubt and the fear were my own doing. I let them fester inside of me until one day I realized that I was the only person standing in the way of my visions and goals. 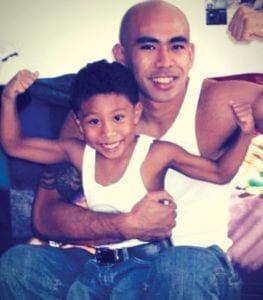 Me and my first born, Jube

According to the National Science Foundation, the average person has 12,000 to 60,000 thoughts per day. Eighty percent of those thoughts are negative and 95% are repetitive. That means you repeat negative thoughts habitually– you think negatively more than you think positively.

Without proper training and a conscious effort, negative thoughts will design your reality. But the beautiful secret to thinking is this: You have the capacity to turn your negative thoughts into positive thoughts, or what I like to call accurate thoughts. By thinking accurately, you can create targets and aim for a more positive future.

Back when my son and I lived in that shack of an apartment, I didn’t let anyone tell me we didn’t deserve more. In the pursuit of my own happiness, I took control over my thoughts and became a North American Champion and showed my son that our thoughts do, indeed, create our realities. And by thinking accurately about the life you want, you can do the same.

**I wrote this piece originally for my column, The Champion's Mindset for The Wave.