How can fear build you up?

You are born with only two fears: the fear of loud noises and the fear of falling. All other fears are manifested in your mind as you age and go through life. You might fear to look foolish. You might fear getting hurt. Or you might fear to say the wrong things. These fears can hold you back and crush your dreams if you let them. But you can manage non-life-threatening fears by asking yourself one simple question, which I’ll get to in a second.

A long time ago, I decided to face a fear that most of society would rather avoid—fighting. But I knew when I started Muay Thai that it was going to help me become stronger than life. I went head-to-head with my fear of losing, my fear of getting hurt, my fear of not becoming the best in the world, and I didn’t look back. Sometimes I won and sometimes I lost. But no matter what, by facing my fears I learned how to make them work to my benefit. 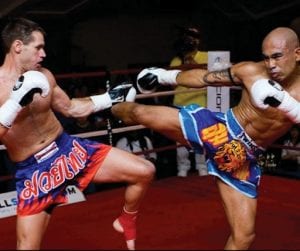 Back in my amateur fighting days.

When I retired from professional fighting in 2011, I was so used to facing fear that without something to overcome, I felt a void. Not because I liked the pain of fighting, but because I knew that by facing my fears, I was helping other people face theirs. Then a few years later I found something to replace fighting, and it has been my biggest fear yet—public speaking.

Surveys tell us that people are more afraid to speak in front of a crowd than they are to die. As the late comedian George Carlin once joked, this means at a funeral most people would rather be lying in the coffin than giving the eulogy. When I was growing up, I would’ve jumped inside the coffin. In my junior year of high school, I feared public speaking so much that I cut an entire semester just to avoid it. But as of two years ago, I have been walking into schools and corporations to spread my CHAMP UP message. Am I afraid each time? Sure. 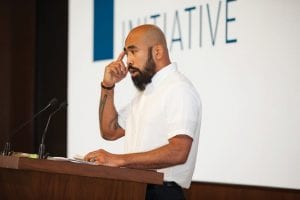 But now back to that question. Every time I am confronted by my fear of public speaking I ask myself one thing, and when you are confronted with fear I want you to ask yourself the same question. Instead of worrying about how your fear is going to break you down, ask yourself, “How is this fear trying to build me up?”

**This post was originally written for my column, The Champion's Mindset for The Wave newspaper